Introduces a new local variable instead of multiple assignments to the same variable.

Sometimes a local variable can take on multiple personalities, playing different roles through the life of a method. This makes code harder to read, because the role of that variable depends on its position in the code. This refactoring cleans up the mess, creating a new local variable for the next assignment.

Available from the context menu or via shortcuts:

Sometimes this refactoring may become available on locals that are assigned to multiple times yet play a single consistent role throughout the code block (e.g., accumulating a total or checking for errors). It is unnecessary to split the local when used in this manner. 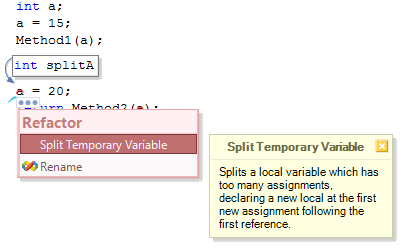 See Also
Remove Assignments to Parameters
Split Initialization from Declaration
Feedback
Was this page helpful?
Thanks for your feedback!
Any other suggestions? Tell us here.