Creates a new local variable initialized with the selected expression. Optionally replaces all occurrences of the expression inside this code block with a reference to the newly declared local variable.

This refactoring is known as Introduce Explaining Variable in Martin Fowler’s Refactoring book.

Introduce Local is great when you have a complicated expression or calculation that has been repeated multiple time in a code block, and you want to consolidate these multiple calculations into a single call. This will help reduce the complexity of code management because future changes to the code will be isolated to one place. Introduce local is also useful when you want to replace the calculation with a local variable that has a name that better explains what the calculation does - improving the readability and maintainability of your code.

Available from the context menu or via shortcuts: 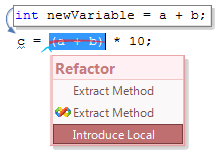 See Also
Extract Method
Introduce Constant
Extract Property
Feedback
Was this page helpful?
Thanks for your feedback!
Any other suggestions? Tell us here.